Over the past few weeks, Pinterest has been saturated with fashion illustrations that are incomplete. Blank paper lies where we expect colour or pattern, and contours terminate in empty space. There is a tradition of leaving the human form incomplete in figure drawing, so that the body’s contours are suggested rather than defined. But here, the human body is fully formed, and it is just the clothes that are incomplete. 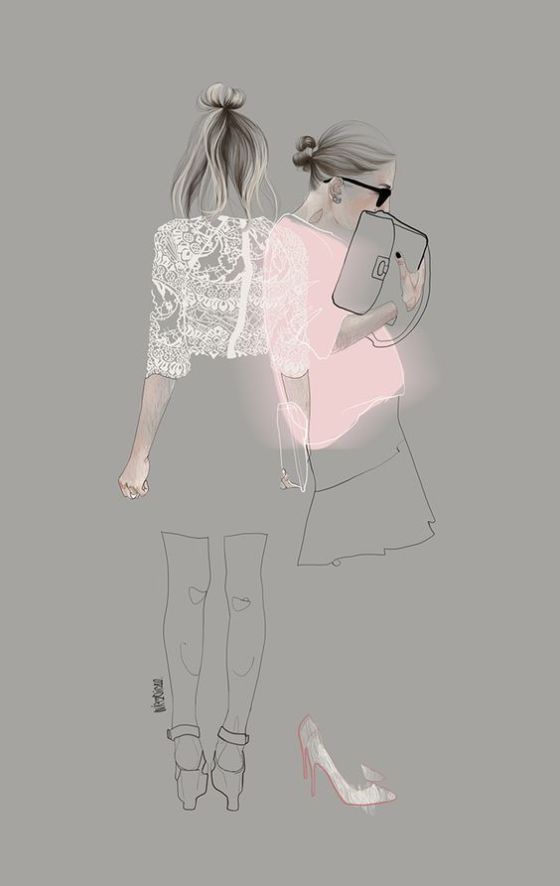 In the example above by Agata Wierzbika, the absence of contours in a lace crop-top reminds us that clothes are not constructed two-dimensionally. Though fashion illustration might reduce the human form to flat, linear forms, garments wrap around the body. From the dressmaker’s perspective, the edges of a garment lie at its hems and seams, shown here as solid white lines. It is the seams, not necessarily the outermost parts of the silhouette, that shape the garment. For lace in particular – an intermittent fabric – hems are the only solid lines that hold the garment together.

We might also look at these illustrations as the next phase of fashion design, in an industry that is tired of seeing ideas recycled time and time again. Following Frederick Jameson’s assertion that there can be no new art [1], in fashion, everything has been done before. It is no longer possible to innovate with new patterns or silhouettes. For many fashion designers, the response to this crisis has been to present the old in new ways, in postmodern pastiche, or unexpected juxtaposition of features that have not previously been paired. These illustrations suggest another possible approach. That is, to imply innovation through absence.

These illustrations can be considered in relation to the Japanese concept of ‘ma’. Graphic designer Kenya Hara stresses that “emptiness doesn’t mean ‘nothingness’… rather it exists in a transitional state, waiting for the content that will eventually fill it”. Hara’s own graphic and product designs are blank, white forms. In their whiteness, they are not empty, but full of “limitless potential”. [2]

‘Ma’ is sometimes equated to negative space – a nothing that can be read as something. In truth, there is no accurate synonym in English for ‘ma’. It means something much more than a meaningful void. In ‘ma’, a blank space has the potential to be all things. Before a bank canvas is decorated with the artist’s first brushstroke, it has the potential to contain any image that has ever, or will ever be painted. Similarly, an incomplete drawing of a garment has the potential to become any garment that could ever be imagined. It could represent mundane, everyday cloth, or could equally represent a garment so divine that it is beyond Man’s ability to represent it in drawn form. 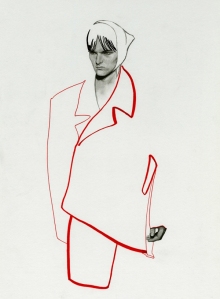 In this way, blank space can appear to transcend Man’s ability to represent his ideas on the page. A blank space can be filled with anything, so it is potentially all things. It is simultaneously “all colours” and “no colours”; something or everything. It is, therefore, infinite. If we have exhausted Man’s ability to innovate in fashion design, the next step might be to draw the impossible; the intangible; something that is unrepresentable through lines, colours and shapes.