What would you wear for your first trip to space? The few space tourists who have journeyed outside of Earth’s atmosphere have had their clothing choices constrained by NASA and other government space agencies. Like the astronauts and cosmonauts who currently reside on the International Space Station, they are restricted to a small selection of ‘routine’ garments, typically a polo shirt and utility trousers.

With the rise of commercial space organisations like SpaceX, it is likely that the next generation of space tourists will have more fashion freedom. For  the current generation of social media users, for whom selfies are a vital part of any travel experience, appearance matters. If and when these commercial space organisations start to ship tourists to the ISS, they will need to address their customers’ desire to express their individuality and fashionability during the trip. Indeed, early attempts at establishing large-scale commercial space trips have been accompanied by attempts to address potential customer’s fashion needs. In 2006, the Hyper Space Couture Contest set Japanese designers the challenge of designing fashionable garments for commercial flights planned by the now-bankrupt Rocketplane Ltd.

The conditions that exist on board a spaceship or space station require a radical new approach to fashion design and apparel manufacture. Not only are their safety concerns (that have been addressed by numerous NASA studies), but also, and perhaps most importantly for fashion designers, there is weightlessness. In orbit, objects exist in a state of constant freefall, where there is no notion of up or down, and the forces of gravity do not noticeably act on a garment.

This weightless environment will force future fashion designers to discard many of the assumptions that are taken for granted in dressmaking on Earth’s surface. Fashion design relies so heavily on ideas about the weight and drape, and on the assumption that clothes will hang on the body, that the weightless environment forces us to discard almost everything that we have learnt about how fabric falls and how clothes fit.

Moreover, the body in zero-gravity does not behave as it does on Earth. Clothes are currently designed for an upright pose known as the “anatomical position”, with spine erect, legs straight and feet flat on the floor [1]. This is the pose of the dressmaker’s dummy, but very different from the pose of a human body in space. In zero-gravity, the body adopts a “neutral posture”, much like that of a snowboarder, will curved spine, head forward, and limbs slightly bent. 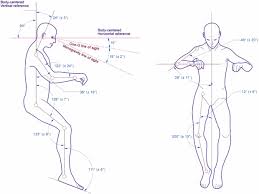 Neutral body posture is adopted by bodies in zero-gravity.

Observations of astronauts on board the ISS have shown that this neutral posture causes standard clothes to fit the body poorly. Annalisa Dominoni’s survey of images transmitted from the ISS records “collars rucked up around [astronauts’] necks” and “backs uncovered” as hems no longer hang perpendicular to the body [2].

In her designs for Spaceport Sweden, Angella Mackey has taken a functional approach to these problems, with skintight, modular neoprene garments. Skin-tight clothes with elasticity are effective at controlling the silhouette, and seem to adhere to science-fictions visions of future spacewear. However, skintight catsuits do not embrace the potential for weightlessness to create floating, undulating silhouettes. Eri Matsui’s wedding dress for zero-gravity (which is actually a disguised combination of trousers and top) creates a very different effect. It’s loose fabric floats in zero-gravity, much like it would underwater.

While contemporary fashion designers may not yet be able to test their spacewear designs in space, zero-g parabolic flights from the USA and Russia duplicate the weightless environment. These flights offer the conditions in which fashion designers could test the effects of weightlessness on drape and fit. It is a great shame that so few travellers have chosen to wear draped garments on these flights (primarily because most are given branded flight-suits), but a few images and videos do begin to show how garments behave on board, including the footage below, filmed by Japanese teenagers wearing school uniforms on board a zero-gravity flight:

I am currently working on a book entitled Spacewear that will explore these ideas further (due for publication by Bloomsbury in 2017).

One thought on “Dressing the Space Tourist”