Foley and the cloth pass The role of a foley artist is to generate sound effects for film, television or radio, usually in post-production. Foley typically produces diegetic sound, to enhance or replace sounds that are seen to originate from … END_OF_DOCUMENT_TOKEN_TO_BE_REPLACED

Humans distinguish themselves from animals in part by their wearing of clothes. ‘From this perspective’, writes Mario Perniola, ‘nudity is a negative state, a privation, loss, dispossession’ [1]. A particular perception that nakedness is primitive was established during early encounters … END_OF_DOCUMENT_TOKEN_TO_BE_REPLACED

Clothes on stage and screen for the visually impaired Some cultural experiences are inaccessible to the blind or partially sighted, and although steps have been taken to improve the accessibility of various visual media, the fashion industry is only just … END_OF_DOCUMENT_TOKEN_TO_BE_REPLACED

A colleague, Danny Graydon, recently conducted an interview with Alan Moore, during which they discussed Moore’s recent short film, Jimmy’s End. Moore makes a cameo appearance in his film, dressed in an embroidered suit and golden winged boots. When Moore first steps onto the screen, we are shown the costume before we are shown the man. For a while, Moore’s Pegasus boots fill the screen, and the camera does not reveal his face until after panning across the awe-stricken faces of every man and woman in the crowd that watches from below. Moreover, we hear the sound of the costume before we hear the sound of Moore’s voice. The Cuban heels tap as Moore steps into frame, and the creak of leather echoes through the room.

The shot of Moore’s boots is reminiscent of the shot encountered in so many Westerns – the close-up of spurred boots as the cowboy arrives for a duel. These shots are remembered for the sound as much as the image. The scraping of heels against gravel, and the jangle of spurs, expose the eerie silence that seems to descend on every Wild West town as a hero and villain prepare for a standoff.

The sounds of clothes tend to go unnoticed in the real world. They are so quiet that they tend to form part of the soundscape that is a background to more significant noises. If we want to hear them, we must cancel out every other sound, and listen closely. In film, this requires all other noises to be hushed. It is a kind of audio-equivalent to zooming-in on the subject: an audio close-up. These diegetic sounds – that is, sounds that originate from something that appears on screen – are often considered secondary to the visual experience of film. They add “surplus value”, complementing objects and events that can already be seen on screen: enhancing, rather than adding to, the narrative [1].

Not all diegetic sounds originate from something seen. Clothing can appear offscreen, its presence signified by sound. These are “acusmatic” sounds, similar to a gunshot heard in a neighbouring room, or a scream from the off-screen victim. Such sounds often accompany actions that may be too distasteful to depict directly. When clothes make sound off screen, it may be for the same reason. The sound of a dress being unzipped can signify that a woman is getting undressed, without the filmmakers having to show her nudity. These sounds do more than simply enhance the narrative – they drive it forward. They describe events that are a crucial part of the plot, and without them the visions on the screen would be confusing or incomplete. 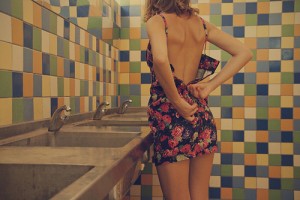 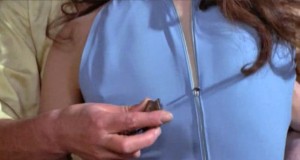