I do not intend to accuse anyone of plagiarism. However, I do feel that it is necessary to observe the similarities between this Victorian fancy dress costume (c. 1887), and the various versions of Batman’s suit. 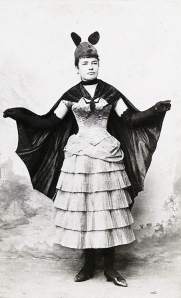 This costume, produced more than 50 years before the first appearance of ‘The Batman’, shares much in common with the Victorian costume. The position of the cape, and arguably even the headpiece with protruding ears, are intuitive. It would seem reasonable for any designer to independently interpret the bat as a costume with these features. The chest insignia, however, bears more similarity than coincidence could excuse. Both of these costumes bear a small, reductionist silhouette of a bat displayed on the chest.

When Bob Kane created Batman, it is likely that he would have been inspired in-part by Superman, who had appeared a year earlier. Superman’s costumes shared equivalent elements, including the cape and chest insignia. It therefore seems reasonable to assume that the Batman costume is an amalgamation of drawings of Superman and observations of bats.

Even if Kane’s costume design was directly informed by previously existing fancy-dress costumes, we must consider that Kane operated in pop culture, where ownership is fluid. Originality is about context and meaning, and less about appearance. If a costume was copied, at least it was recontextualised. In Detective comics, it acquired new audiences, and new meaning.