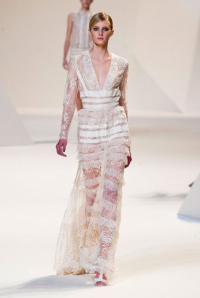 It is the case with many artefacts that context creates meaning. A urinal in a bathroom is a utilitarian object, but displayed in a gallery and re-titled it ‘the fountain’, it becomes art. Lace is similarly affected by context. Even colour, which can have such fixed meanings in fashion, can be read differently in lace garments. Traditional colour meanings are over-ruled by context. White lace can be virginal in a bridal veil, but trashy in a peep-hole teddy. Lace has surprisingly little inherent meaning, as it varies so much depending on when, where and how it is used. In an Ann Summers lace body, lace is risqué; in Valentino’s S/S 2013 Couture collection, it is demure.

Two properties have given lace its special status. Firstly, its complexity makes it difficult to manufacture. Historically, it was made by hand, using a laborious process that required time and skill. This made such an extravagance that for many centuries it was a privilege of the aristocracy. In the Baroque era, lace was so prized that it was worn in equivalent contexts to gold and jewels. Cuffs and collars of lace were as much signifiers of wealth as bracelets and necklaces. It is this history that Valentino or Ellie Saab have in mind when they send a model down the catwalk draped head-to-toe in fine lace and tulle. 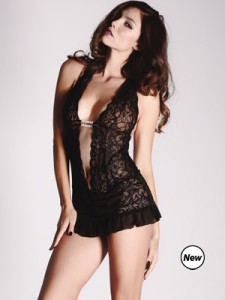 By concealing and revealing in equal parts, lace is much like a glass half-full or half-empty. It down to the user to select his or her interpretation. The designer or the wearer can use lace for modest or immodest purposes. We may consider lace to be erotic in a bra and thong, but an identical lace can appear modest in a funeral veil. Here, the distinction is made between concealing and revealing the body. Lace lingerie covers parts of the body that are normally hidden: its purpose is to reveal. By contrast, a lace veil covers a part of the body that is normally on show: its purpose is to conceal.