Part 2: The need for transparency

By all accounts, James Bond’s trans-status masquerades are unconvincing. Common consensus in the blogsphere is that his most absurd disguise is that of a Japanese Fisherman in You Only Live Twice. Now considered “racially insensitive” [1], this disguise challenged believability and courted controversy.

Sean Connery’s Japanese look was achieved with the help of a black toupee and prosthetic eye-pieces. Despite the dark make-up and kimono, Connery remains clearly identifiable. He is, and always will be, a 6-foot tall Scotsman. Although contemporary audiences may find it laughable, this level of transparency may be exactly what is needed in an on-screen disguise.

It is a long-established convention in theatrical performance that a disguise must be transparent to the audience for the narrative to function as intended. Indeed, audiences do “not expect to be fooled by stage disguise”. Peter Hyland observes that, in the tradition of theatrical disguise, “the audience does not need to be fooled by something that it sees on stage in order to believe that the people on the stage have been fooled by it.” They need to be aware that “an actor who has just entered [is] playing a disguised version of the same character he had played before rather than a different character”[2].

On screen, disguise is complexified by the fact that the actor is already in a form of disguise. Like all actors, Connery spends his working life permanently disguised. When an actors are celebrities, much of their career requires the performance of ordinariness. A celebrity may be reduced to normalcy through make-up and wardrobe. Though their famous faces draw in the crowds, their costumes must convince audiences that the roles they inhabit are familiar: ordinary housewives, businessmen, school teachers. Audiences must be able to make a distinction between the actor’s costume and the character’s costume. The first of these, the actor’s costume, must enable the viewer to look beyond the real-life identity of the actor to that of the character; it must be convincing. The second, the character’s disguise, must simultaneously present both of his acted identities; it must be transparent. The audience needs to appreciate that the actor is playing one role with two identities, not two separate roles. This is not Connery playing a fisherman, it is Connery playing Bond in disguise.

Transparency of a disguise may be enabled through plot. Audiences may be shown the transition from one alter-ego to the other, so that we can track Bond into his new identity. We follow him in the acquisition of his disguise, a process that sometimes requires 007 to resort to petty theft. In Dr. No, Bond steals a radiation suit so that he may safely enter a nuclear reactor room; In Diamonds are Forever, he enters a hospital wearing a doctor’s coat; In Moonraker, Bond and a co-conspirator steal yellow jumpsuits. On all these occasions, Bond must first incapacitate the original wearer of the uniform, typically with a quick blow to the head. In this way, the acquisition of the disguise provides a moment of light relief before the plot ascends towards its climax. 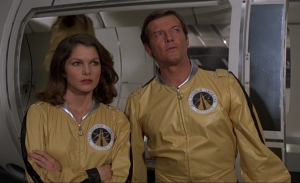 Images:
Sean Connery, Bond as a Japanese fisherman, in ‘You Only Live Twice’: http://you-only-blog-twice.blogspot.co.uk/2012/03/you-only-live-twice-1967.html
Connery in a henchman’s jumpsuit, in ‘Moonraker’: http://thesuitsofjamesbond.com/?tag=disguise